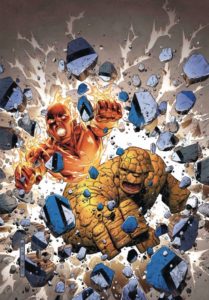 Titles like MARVEL TWO-IN-ONE and MARVEL TEAM-UP are historically important series that ran for a long time and told stories about Marvel characters outside of their main titles where they didn’t have to bear the full weight of their massive continuities. It’s a fitting stroke of genius to revive at least one for MARVEL LEGACY. And is this the first glimpse of the Fantastic Four in print in two years?!?

“The Fate of the Four Part 1 THE FOUR ARE NO MORE, SO TWO MUST DO. Something is very wrong with THE HUMAN TORCH and only THE THING can help him. It’s the Marvel Universe reunion you’ve all been waiting for (well, HALF of it, at least.). Plus: What monumental secret has DOOM been hiding since the end of SECRET WARS, and how will it completely change the lives of Johnny Storm and Ben Grimm? PLUS: Includes 3 bonus MARVEL PRIMER PAGES. Rated T”