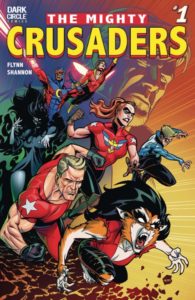 Archie Comics’ superheroes are not as well-established or well-known as their Riverdale gang. But they’ve been around since before the Silver Age with attempted revivals every so often. The Mighty Crusaders was a group of previously established heroes brought together as a team in 1965, similar to how the Avengers was initially formed. Their first series in 1965 ran for seven issues and was scripted by none other than Jerry Siegel, who you may recognize as the co-creator of Superman. So, if this title seems unknown to you and if the heroes seem like they’re from another era…it’s because they are kinda. It’s hard to say what they need to elevate them up into the mainstream, but I hope this series has the magic mix.

“New Ongoing Series. ‘Back in the Saddle.’ The mightiest team of superheroes are back. A throw-down with a prehistoric terror in the heart of Washington D.C. sets the stage for the dramatic return of a wayward hero. Meanwhile, half a world away, a sinister plan begins to awaken an ancient evil.”