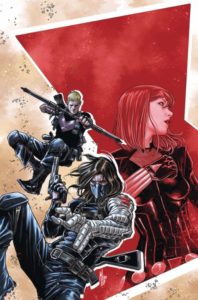 Wow, the revival of a Marvel title from the 60’s! TALES OF SUSPENSE [1959] ran for 99 issues from 1959 to 1968. Issue #39 is famous for introducing Iron Man, but other issues gave us the Natasha Romaoff Black Widow (#52) and Hawkeye (#57). Initially launched as a science fiction anthology series along with TALES TO ASTONISH, Stan Lee himself is credited with scripting many of the early monster stories, where you can find ‘prototype’ characters and situations of future Marvel icons. As the series progressed, the monster stories faded away in favor of more action-oriented characters and stories. Captain America began featuring in the series with issue #59, and when the series ended at issue #99, a new CAPTAIN AMERICA [1968] series picked up its numbering as of issue #100. If Marvel can keep this series going beyond its planned 5-issue mini-series and introduce even just one more great character, they will have returned to their formula of success. This is Marvel Legacy at its heart!

“RED LEDGER Part 1 (OF 5) SPRINGING FROM THE PAGES OF SECRET EMPIRE. THE BLACK WIDOW is dead…but someone is killing her enemies. With a broken heart and a bloody trail to follow, HAWKEYE is looking for answers. And the only person alive who may have them is Natasha Romanoff’s OTHER ex-boyfriend, THE WINTER SOLDIER. Can they trust each other long enough to unravel the web of mysteries that Black Widow left behind? Rated T+”