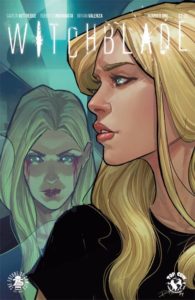 At 185 issues, Witchblade was one of Image’s (Top Cow) longest-running and most successful comic book series, running two decades. It was an instant hit from the very beginning, owing–no doubt–in no small part to Michael Turner’s art, especially his depictions of the sparsely-clothed and busty Sara Pezzini. Witchblade has been adapted into a television series, manga, anime, and a novel. It was optioned for a movie, but was never produced. The development of a second television series was announced in January 2017 for an as-yet-unspecified release. Now, a second comic book series with a new Witchblade wielder…can’t wait to see what her story will be.

“‘LIFE AFTER,’ Part One Gunned down and left for dead on a New York rooftop, Alex Underwood’s life should have ended there-but instead, at the moment of death, she became host to the Witchblade, a mystical artifact that grants the woman wielding it extraordinary powers. But the power comes with a heavy cost, and Alex finds herself thrust into the center of an unseen battle raging on the snowy streets of NYC. Demons are real and walking among humans, and every one of them is intent on taking out the Witchblade’s newest host before she becomes too strong to kill. But the artifact chose Alex for a reason, and she’s not going down without a fight.”