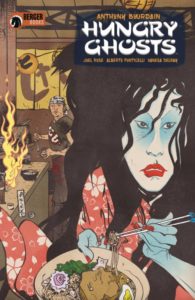 Japanese-inspired ghost stories spun around a common thread of food. Looks delicious! This mini-series kicks off Dark Horse’s new imprint, Berger Books. Karen Berger is best known for her integral role in creating DC’s Vertigo imprint back in 1993. She was the line’s Executive Editor until 2013. With this new imprint at Dark Horse, she’ll be editing a select, curated line.

“On a dark, haunted night, a Russian oligarch dares a circle of international chefs to play the samurai game of 100 Candles-where each storyteller spins a terrifying tale of ghosts, demons and unspeakable beings-and prays to survive the challenge. Inspired by the Japanese Edo period game of Hyakumonogatari Kaidankai, Hungry Ghosts reimagines the classic stories of yokai, yorei, and obake, all tainted with the common thread of food. First course: With bad consequence, a ramen chef refuses to help a beggar, and a band of pirates get more (and less) than they were bargaining for after their encounter with a drowning woman turns ghastly. Hungry Ghosts is cooked up by the infamous author and chef, Anthony Bourdain (Kitchen Confidential, Emmy-Award winning TV star of Parts Unknown) and acclaimed novelist Joel Rose (Kill, Kill, Faster, Faster, back again from their New York Times #1 best seller, Get Jiro!). Joining them this issue are stellar artists Alberto Ponticelli and Vanesa Del Rey, with amazing color by Jose Villarrubia, and a drop-dead cover by Paul Pope.”