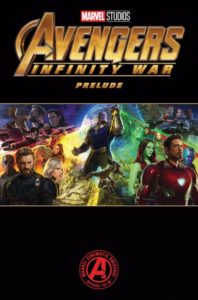 Whoo hoo! A 2-issue mini-series that sets up the Avengers Infinity War movie in the Marvel Cinematic Universe (MCU). Some of these official mini-series are adaptations of the movies, but this one looks like original material, not previously seen in any form.

“When a terrorist puts the Avengers at odds, CAPTAIN AMERICA and THE WINTER SOLDIER go rogue to find him – but IRON MAN isn’t far behind. Will the Avengers survive the fallout? Then, find out where Captain America, the Falcon and the Black Widow are headed next – because the world needs heroes, whether it wants them or not. And get a sneak peek at Tony Stark’s brand-new armor. Get ready for MARVEL’S THE AVENGERS: INFINITY WAR in part 1 of this special prelude. Rated T”