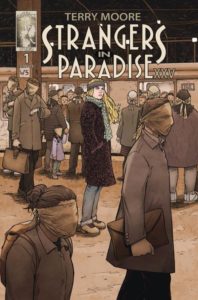 Fans rejoice! Terry Moore is back with more Strangers in Paradise (SIP) with a new series called STRANGERS IN PARADISE XXV. His original long-running series is a masterfully crafted story with multi-dimensioned characters. After SIP, Moore published other great series like: ECHO, RACHEL RISING and MOTOR GIRL. But now, he’s thankfully revisiting the SIP universe.

“America’s favorite couple is back. To celebrate its 25th-Anniversary, the Eisner Award-winning series is back with an all-new story beginning with this #1 issue. Francine and Katchoo are living the dream until they learn a former Parker Girl is in hiding and writing a tell-all book about the wicked empire Darcy Parker built with Katchoo at her side. Determined to stop her, Katchoo enlists the aid of her mercenary sister Tambi and the hunt is on.”