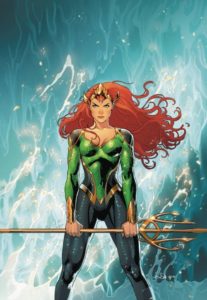 Mera gets her own mini-series! Introduced in the Silver Age, Mera wasn’t as much of a player in the DC Universe until the Blackest Night crossover event in 2009. She really shined in the New 52 relaunch of Aquaman, and now has a place in the Justice League movie and the follow-on Aquaman movie.

“From the pages of AQUAMAN comes a brand-new adventure starring Mera, in her own title for the first time ever. As the brutal Atlantean Civil War rages, Mera must keep the peace between the surface world and Atlantis as its newly anointed queen in exile. But when Aquaman’s brother Orm, a.k.a. Ocean Master, learns of his homeland’s fate, he’ll stop at nothing to return to Atlantis as its king and savior.”