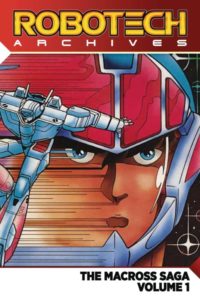 This is exciting! A 20-volume series of classic Robotech reprints. Released on a quarterly schedule, it’ll take 5 years to collect them all. Buckle up, buttercup, this’ll take a while. But, I’ll bet most will be interested mainly in the original Comico issues which adapted the U.S. television cartoon series. That’ll be just the first seven volumes.

“The Robotech animated series is legendary – And now you can immerse yourself in the classic comics which recreated the legends. A new series of books collecting classic Robotech material, most of which are out of print of have never been previously published. Featuring classic Robotech fan-favourite creators such as Carl Macek, Jack Herman, Mike Leeke and Neil Vokes.”