Hello, comic fans! Spiral Comics is working on some exciting improvements to our website, but you’ll have to wait to hear about them! Otherwise, our every waking thought has been on the new Star Wars movie. You should definitely check out the new Thrawn comic series from Marvel this month. The novel was outstanding. As always, let us know if there is something we can track down for you…we try to cater to regular, normal newbies…crazy, intense collectors…and everyone in between (except Bor Gullet, it already knows the truth) –Glenn

Focus This Month:
Get Started In… Deadpool

The Merc with a Mouth! Think you know everything about this absurdly humorous anit-hero from villainous beginnings to iconic status? Find gems in our resource guide!

With help from Spiral Comics, it’s easy to get started in comic books staring your favorite characters from movies or television. We’ve created specific articles–and we keep them current–to help you get started in particular characters and series. 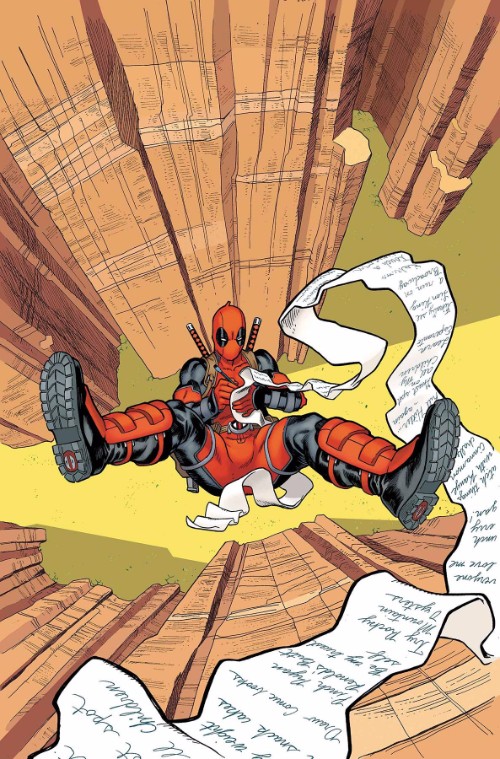 The following tags were added to Spiral Comics’ database since last month. They can represent existing pop culture tags that hadn’t been created in our database yet, as well as brand new tags from the latest Previews catalog. Click on the links to see a short description and any items that can be pre-ordered this month…
APPARAT SINGLES GROUP
COMIC JOURNAL’S TOP 100 COMICS OF THE 20TH CENTURY
DC EARTH ONE
DESCENDANTS
INVADER ZIM
SENTRY (ROBERT REYNOLDS)
VAULT CULT CLASSIC UNIVERSE
WHERE’S WOLVERINE? ‘POST-CREDITS SCENES’ (2018)

Each month, Spiral Comics focuses on a tag which has a stand-out presence in the latest Previews catalog. Check it out!
DC NEW AGE OF DC HEROES (2017)
Springing from the DARK NIGHTS: METAL crossover event, DC’s NEW AGE OF DC HEROES introduces a group of new comic book series with some existing characters and teams as well as some new ones. With these new series, there is an increased emphasis on a more synergistic approach to storytelling between the artist and the writer, all of whom are some of DC’s top talent. The first issues of the series feature an unprecedented vertical fold-out cover. Initial series include: DAMAGE, THE SILENCER, SIDEWAYS, THE TERRIFICS, THE IMMORTAL MEN, THE CURSE OF BRIMSTONE, THE CHALLENGERS, and THE UNEXPECTED. Star Wars: Thrawn #1
Wow, this is exciting! Thrawn is one of my favorite Star Wars characters, and Zahn’s latest novel in the New Canon era is absolutely outstanding! Any true Star Wars fan MUST have this series!

“One of the most cunning and ruthless warriors in the history of the Star Wars Universe, Grand Admiral Thrawn is back with a six-issue miniseries about how he became one of the most feared military tacticians in a galaxy far, far away. Written by Jody Houser (ROGUE ONE ADAPTATION) and drawn by Luke Ross (STAR WARS: DARTH MAUL, STAR WARS: THE FORCE AWAKENS ADAPTATION), follow the comic adaptation of Timothy Zahn’s New York Times best-selling novel about Thrawn’s rise in the Imperial ranks.” ROBOTECH Archive Omnibus Vol 1: Macross Vol 1
This is exciting! A 20-volume series of classic Robotech reprints. Released on a quarterly schedule, it’ll take 5 years to collect them all. Buckle up, buttercup, this’ll take a while. But, I’ll bet most will be interested mainly in the original Comico issues which adapted the U.S. television cartoon series. That’ll be just the first seven volumes.

“The Robotech animated series is legendary – And now you can immerse yourself in the classic comics which recreated the legends. A new series of books collecting classic Robotech material, most of which are out of print of have never been previously published. Featuring classic Robotech fan-favourite creators such as Carl Macek, Jack Herman, Mike Leeke and Neil Vokes.” X-Men: Red #1
Another ongoing X-Men title! The team is a perfect mix of old heads and greenhorns: Jean Grey, Nightcrawler, Namor, Wolverine (Laura Kinney), a Wakandan mutant named Gentle, one of Laura’s clone sisters named Gabby, and a brand new character named Trinary. Jean Grey leads the new team of X-Men in a story that will feature “new uniforms, a new team headquarters, and exciting new characters,” as well as “dynamic hero moments, great character interactions, and a surprise villain at the end.” I’m actually pretty excited for this one. I really like how they’ve mixed seasoned X-Men with fresh meat.

“The Hate Machine Part 1 THE FIRST SENSATIONAL ARC OF AN ALL-NEW TEAM OF X-MEN STARTS HERE. JEAN GREY is back. Returned to a world she doesn’t recognize, the First Lady of the X-MEN gathers an unlikely team – NIGHTCRAWLER, NAMOR and LAURA KINNEY (A.K.A. ALL-NEW WOLVERINE) – to face an evil that threatens to tear down XAVIER’s dream by any means necessary.”