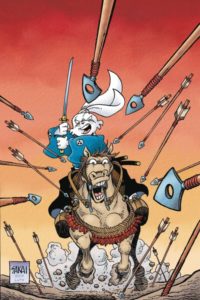 Is Usagi Yojimbo switching from an ongoing series to a string-of-mini-series release schedule? Solicit doesn’t say one way or the other. The ongoing series has kinda hit a patch of variation over the last year, but I optimistically look forward to many, many more issues on any schedule. UY is one of the consistently best comic series out there.

“On his way to see Inspector Ishida, Usagi is confronted by Shogunate guards…a sign of the times. While unraveling a pair of murders in town later, Usagi and Ishida become wary as they find the corpses stripped of all identification-except for a talisman that leads to a startling discovery. Part one of seven-the perfect place to start.”