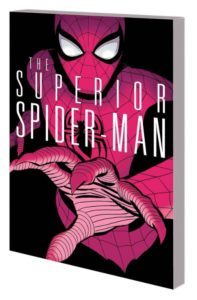 I really enjoyed this series. Octavius explored some life paths that Peter never had the nerve to explore. It was awesome watching other people suspecting something was up. Looks like this will all fit in two volumes of a ‘complete collection’ trade paperback series. Excellent.

“Doctor Octopus claims the ultimate victory over Spider-Man. After years of defeats at the wall-crawler’s hands, Otto Octavius achieves the unthinkable – putting his mind in the body of Peter Parker. As one Amazing era ends, a new one begins for a smarter, stronger, Superior Spider-Man. And he’ll prove it, by donning an upgraded costume – and taking on the all-new Sinister Six. But things aren’t so friendly in this Spidey’s neighborhood – and his more ruthless approach to crimefighting is cause for concern for his ‘fellow’ heroes. Will his violent actions mean Spider-Man is an Avenger no more? Featuring classic foes including the Vulture and the Green Goblin, and new friends such as Anna Maria Marconi, this is Spider-Man like you’ve never seen him before – but whatever happened to the real Peter? Collecting AMAZING SPIDER-MAN (1999) #698-700 and SUPERIOR SPIDER-MAN #1-16. Rated T+”