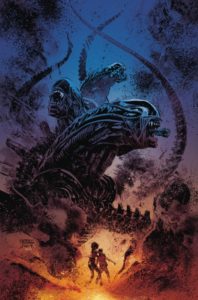 Aliens fans have something to celebrate on ‘Alien Day’…a new mini-series from Dark Horse. There’s an ‘Alien Day.’ Hmmm, who knew.

“The Trono colony on LV-871 is under attack. Emergency evacuations are ordered. Evac shuttles are taking off. All twelve-year-old Maxon and his mom have to do is make it to the spaceport. Except between them and it are…Aliens. A terrifying coming-of-age story by master storyteller Gabriel Hardman. o Gabriel Hardman storyboarded the films Batman: The Dark Knight Rises, Logan, Dawn of Planet of the Apes, and many others. o A reexamination of why we fear the Aliens. o On sale in time for Alien Day (4/26).”