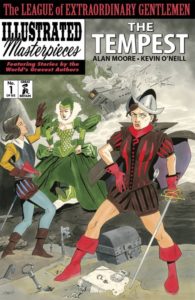 Don’t let the mediocre film cloud your judgment of this franchise. This is some of Alan Moore’s best work. Must read stuff.