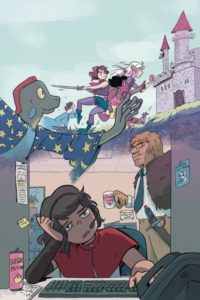 Hmm, this looks exactly like what it’s titled–the fantasy role-play genre crossed with the modern world–a la ‘modern fantasy.’ I don’t know anything about the creators, but it looks like it could be worth a look.

“A young Ranger woman who came to the city with dreams of adventure, her drug dealing reptilian wizard roommate, and her boisterous Dwarf maiden BFF embark on a modern day quest to save the world while struggling to keep their crappy day jobs and pay off their student loans. The roommates become embroiled in danger when one of their significant others finds himself taken by criminals, and the trio must save him. From the creator of Henchgirl. Rafer Roberts (AandA: The Adventures of Archer and Armstrong) makes his Dark Horse debut.”