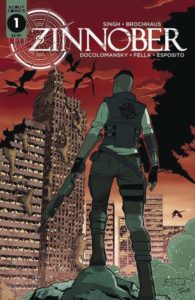 This is a really cool-looking, new, dragon-themed title from Scout Comics.

“Twenty years ago dragons returned to Earth and laid waste to human civilization. In the event the surviving humans named ‘Zinnober,’ Claire, then a young girl, lost her parents to the devastating force of these primeval creatures. Today, she’s hell-bent on avenging the death of her family. But will the skills she was taught by her foster-father, the troubled ex-Marine James, be enough to fight an unstoppable enemy older than the Earth itself? Will the knowledge of her newest ally, the young scientist Andrew, bring her even closer to her goal? And what role will the mysterious Followers, a cult of mad dragon worshippers, play in all of this?”