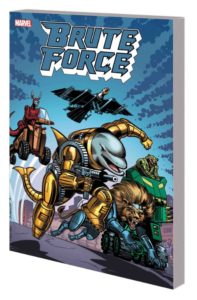 Marvel arrived way late to the 80’s Funny Animal trend. While the Brute Force animals are a mild stretch for inclusion, this compilation also contains POWER PACHYDERMS [1989] #1 which can be tacitly considered one of Marvel’s limited entries to the genre. Enjoy!