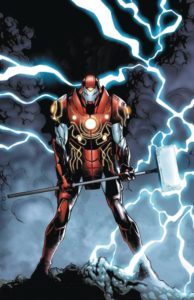 The Infinity Wars spins on iconic characters’ origins are some of the freshest rehashes I’ve seen. This one mashes up Iron and Thor into one origin. Cool.

“INFINITY WARPS? When Stark Odinson, the brainy but arrogant son of the All-Father, was kidnapped by Ice Giants and forced to make them an armory, he turned their forges against them and became the armored Asgardian, Iron Hammer. Rated T+.”