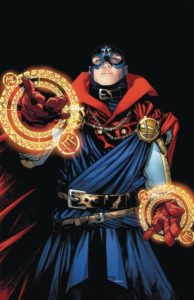 You like Captain America and Doctor Strange? You’ll like them more than double when their origins are mashed together…Soldier Supreme!

“INFINITY WARPS? Classified 4-F by the military, Stephen Rogers was unable to serve his country in World War II…until a secret government program tapping into arcane sorcery transformed him into the Soldier Supreme, the magical warrior embodiment of the American spirit. Rated T+.”