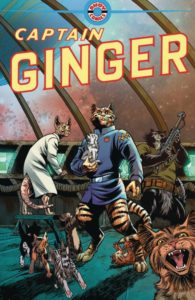 Here’s a very interesting new series from small, independent publisher Ahoy Comics. It’s written by Stuart Moore who’s worked in the big leagues, so you don’t have to worry too much about the base quality and can just evaluate the subject to see if it interests you. Plus, there’s a backup prose story from big name Grant Morrison. Ahoy may be putting out some sleeper hits here.

“When the human race died out, the cats inherited the Earth. Or at least one starship. Now the intrepid Captain Ginger struggles to keep his fellow felines united against a hostile universe. Thirty-five pages of comic adventure-with a bite-by writer Stuart Moore (Deadpool the Duck, Batman: Noir Alley) and artist June Brigman (Power Pack). Plus: An all-new text story by comics legend Grant Morrison, ‘The Electric Sky Bear That Inspired Ben Franklin,’ illustrated by Phil Hester, and a cartoon by Shannon Wheeler.”