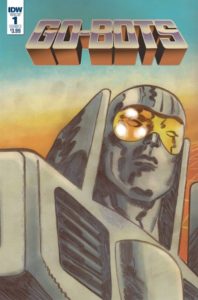 By the law of conservation of transforming robots at IDW, if they stop producing Transformers comics, they will start producing Go-Bot comics. It is written. Actually, since Hasbro acquired Tonka, the Go-Bots were established as an alternate reality within the Transformers franchise. But Hasbro only owns the intellectual property. The robot toys are still owned by Bandai, who had them licensed to Tonka. Anyway, let’s see where this Go-Bot comic goes.

“Go-Bots have changed our way of life. Leader-1 is a self-aware fighter jet on a hostage rescue mission with his partner, Commander Nick Burns. Scooter is the personal transport and best friend to undergrad A.J. Foster. Turbo is Matt Hunter’s transforming race car in the hottest sport in America, Go-Bot Racing. Cy-Kill is the champion of the illegal, underground Go-Bot Fighting League. A sophisticated sci-fi epic from the visionary creator that brought you Transformers vs. G.I. JOE. They say they’re here to help us, but are they here to replace us? From the creative mind that brought you IDW’s Transformers vs. G.I. JOE. Visionary creator Tom Scioli unleashes his imagination on the bizarre, absurd, and wonderful world of Go-Bots.”