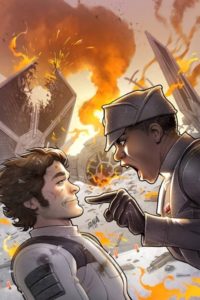 There’s still more to learn about Han Solo. This mini-series explores his time as an Imperial cadet. As you know, it didn’t turn out too well…pilot to mudtrooper is not upward movement.

“YOUNG SOLO’S ADVENTURES CONTINUE. HAN SOLO escapes Corellia by joining the IMPERIAL NAVY, vowing to return for QI’RA. But how does a thief used to the chaos of the streets adjust to the order and discipline of the military? Not well. Han’s dream of becoming a pilot is quickly grounded as he realizes he may not even survive basic training. Rated T.”