Hello, comic fans! I just finished season 2 of Netflix’s Iron Fist. How about that epilogue!?! I’m excited to see where next season goes. It looks like the writers are leaning heavily on Fraction and Brubaker’s IMMORTAL IRON FIST series from 2007, which expanded greatly on the Iron Fist mythos. Speaking of expanding on a mythos, Boom! Studios now has the license for Serenity (Firefly) comics, and their first series will explore Mal and Zoe’s time as Browncoats. Historic! Can’t wait! And again this month, there are tons of brand new series being offered, including, but not limited to: ALIEN 3 (an adaptation of William Gibson’s unproduced screenplay), DR. HORRIBLE, GREEN LANTERN, SHAZAM!, SPIDER-MAN (an all-ages series from IDW!), STAR WARS ADVENTURES: DESTROYER DOWN (Rey on Jakku!), GO-BOTS, MAGIC: THE GATHERING, UNCANNY X-MEN, DEAD MAN LOGAN, MARVEL’S CAPTAIN MARVEL PRELUDE, STAR WARS: HAN SOLO–IMPERIAL CADET, JAMES BOND 007, and BATTLESTAR GALACTICA. As always, let us know if there is something we can track down for you…we try to cater to regular, normal newbies…crazy, intense collectors…and everyone in between (except for Typhoid Mary, because she’s gravely mentally ill) –Glenn

Focus This Month:
Get Started In… CAPTAIN AMERICA

Another massive, informative guide added to our site this month–Captain America (Steve Rogers)…one of the most popular Marvel characters in existence! Check out our guide to getting started in Captain America comic books! 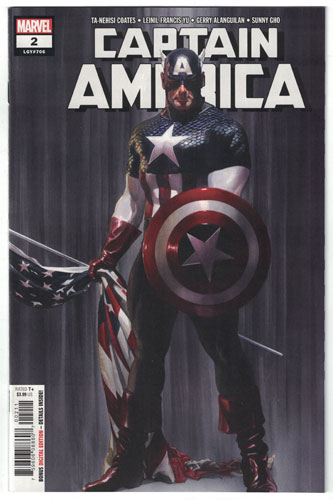 The following tags were added to Spiral Comics’ database since last month. They can represent existing pop culture tags that hadn’t been created in our database yet, as well as brand new tags from the latest Previews catalog. Click on the links to see a short description and any items that can be pre-ordered this month…
BARBIE
DEATH OF SUPERMAN (1992)
DILBERT
DR. HORRIBLE
DRAGON BALL
DROWNED EARTH (2018)
GO-BOTS
GOD OF WAR
J.R.R. TOLKIEN’S MIDDLE-EARTH
JINGLE BELLE
MINIONS
SHAZAM!

It’s VIDEO GAME month in this month’s Previews catalog, so all the publishers have put forth all their video game-related offerings once again. Check ’em out! 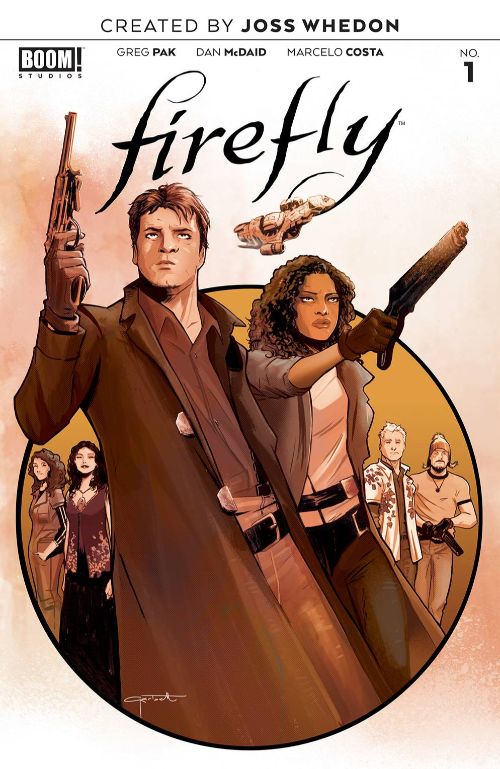 Firefly #1
Awesome!! For me, this is probably the most exciting offering this month! As far as Serenity (Firefly) comics go, apparently Dark Horse is out and Boom is in. And Boom’s first series will explore the Unification War era–where Mal and Zoe forged their strong relationship and what it may mean for today. Written by veteran, Greg Pak, this is sure to be great!

“BOOM. Studios, along with visionary writer and director Joss Whedon (Buffy the Vampire Slayer, The Avengers), presents an all-new era of the pop culture phenomenon Firefly , as one of the most demanded stories in the franchise’s history is revealed for the first time. Captain Malcolm ‘Mal’ Reynolds, a defeated soldier who opposed the unification of the planets by the totalitarian governed Alliance, will undertake any job-legal or not-to stay afloat and keep his crew fed. Find out now how his story began as BOOM. Studios delves into Malfs past, how he met his first mate Zoe and the real truth about the War of Unification.the intergalactic civil war that divided friend and family alike. Focusing on family, loyalty, identity, and the price of redemption, writer Greg Pak (Mech Cadet Yu, Totally Awesome Hulk) and artist Dan McDaid (Judge Dredd: Mega City Zero) take you back to the battleground where Mal’s journey began.” 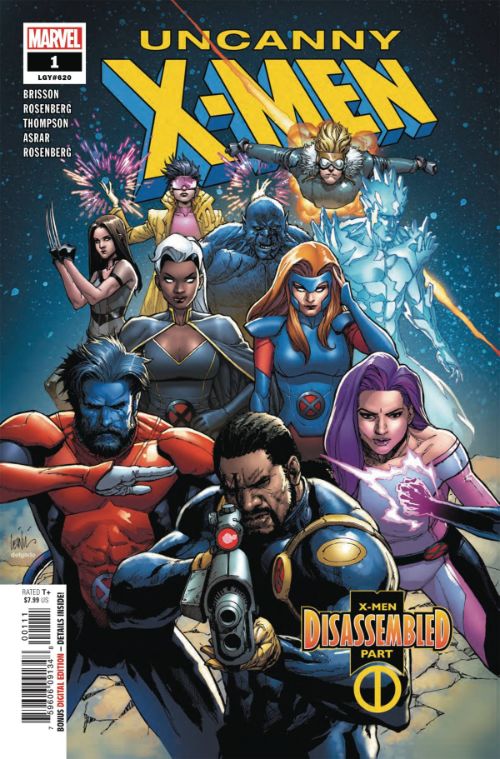 Uncanny X-Men #1
If you were looking for a place to start with the X-Men, there’s no place like the relaunch of the flagship series with a new #1. Both X-Men: Blue and Gold are ending to make way for Uncanny. I’m acutely interested to see where the team will go. This 10-week weekly release is tough on the wallet, but could be well worth it. I’m also very interested to see if there will be any legacy numbering with this series, as the X-Men sat out of the wholesale re-numbering earlier this year.

“THE CHILDREN OF THE ATOM ARE BACK. New ongoing series kicking off with a 10-part weekly epic, the flagship X-Men series that started it all is back and better than ever. Starting with a mysterious and tragic disappearance, the X-Men are drawn into what might be…their final adventure? X-Fan favorite writers Ed Brisson (EXTERMINATION), Matthew Rosenberg (PHOENIX RESURRECTION) and Kelly Thompson (MR. and MRS. X) and all-star artists Mahmud Asrar (X-MEN RED), R.B. Silva (X-MEN BLUE), Yildiray Cinar (WEAPON X) and Pere Pérez (ROGUE AND GAMBIT) join forces to bring you…X-MEN DISASSEMBLED?” 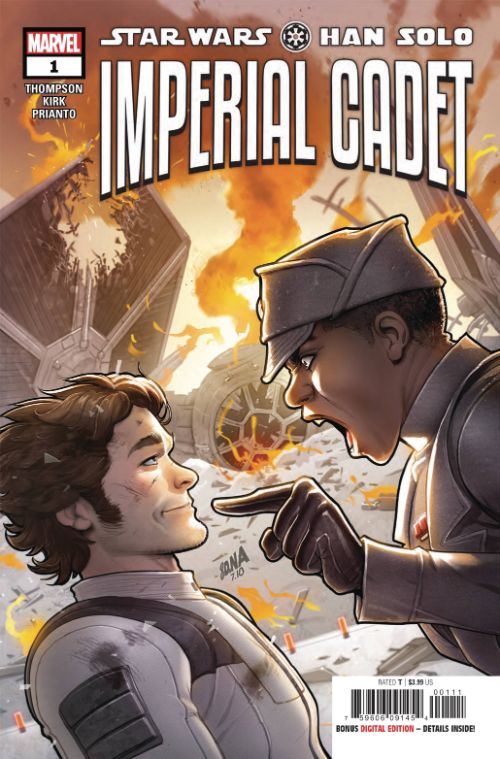 Star Wars: Han Solo–Imperial Cadet #1
There’s still more to learn about Han Solo. This mini-series explores his time as an Imperial cadet. As you know, it didn’t turn out too well…pilot to mudtrooper is not upward movement.

“YOUNG SOLO’S ADVENTURES CONTINUE. HAN SOLO escapes Corellia by joining the IMPERIAL NAVY, vowing to return for QI’RA. But how does a thief used to the chaos of the streets adjust to the order and discipline of the military? Not well. Han’s dream of becoming a pilot is quickly grounded as he realizes he may not even survive basic training.” 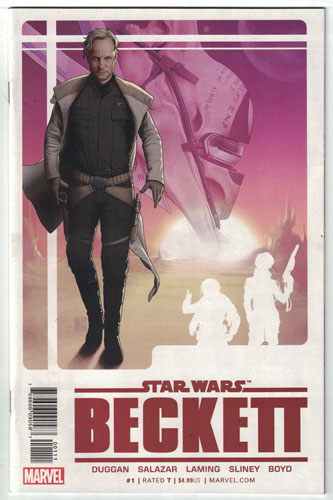 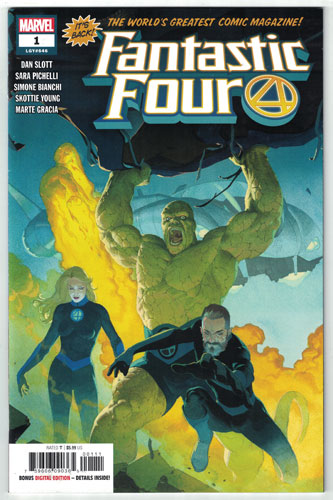