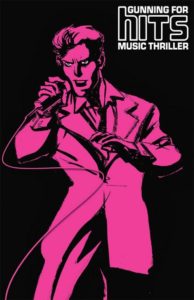 I don’t usually go for music comics, but this crime thriller set in the 80’s could be quite good.

“SERIES PREMIERE. Set in the shady New York City music scene of the mid-80s, GUNNING FOR HITS stars Martin Mills, a record company talent scout with an inscrutable past. Follow Martin as he attempts to sign a rock band that’ll conquer the world in this music business crime thriller written by music producer JEFF ROUGVIE (David Bowie, Big Star) with art by MORITAT (The Spirit, Harley Quinn, Hellblazer). Plus: each issue will include a background feature and a Spotify playlist.”