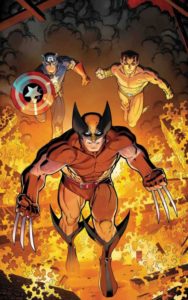 The 1988 MARVEL COMICS PRESENTS had some absolutely amazing Wolverine stories in it. Some are classic, can’t miss story arcs, including the first details on the Weapon X program. The success of this new incarnation will be completely based on how relevant the story arcs are to the characters. I’m just sayin’, if the stories are just stories without any lasting impact on the characters’ overall history, then there will be little to celebrate decades from now.

“THE CLASSIC MARVEL SERIES RETURNS FOR MARVEL’S 80th ANNIVERSARY. Three titanic tales celebrating the first decade of Marvel stories. First – an all-new tale of the man they call the Wolverine begins in the 1940s. Then comes Captain America, the first Avenger of World War II still fighting for freedom today. And finally, the untold tale of Namor and the atom bomb. Rated T+.”