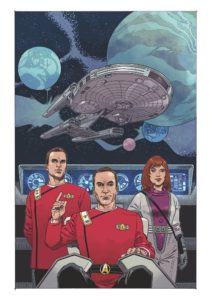 So, cool! A one-shot story of Captain Picard from when he was captain of the Stargazer!

“Twenty years before he took command of the U.S.S. Enterprise-D, Jean-Luc Picard sat in the captain’s chair of the U.S.S. Stargazer. Picard served with distinction aboard the Stargazer for many years on his way to becoming the most respected captain in Starfleet. But in this early mission, Picard showed that even he is merely a man. Featuring an adventure early in Captain Picard’s career. Reuniting Fallen Angel dream team and Star Trek fan favorites, Peter David and J.K. Woodward. Celebrate 20 years of IDW with new stories about your favorite characters.”