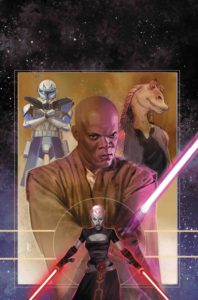 This cool-looking special has short stories about Asajj Ventress, Captain Rex and Mace Windu, so that should balance out one about Jar Jar Binks.

“THE GREATEST HEROES OF THE REPUBLIC, THE DEADLIEST VILLAINS – AND EVERYONE IN BETWEEN. Four creative teams. Four stories featuring your favorite Star Wars characters. The baddest Jedi in the galaxy has a score to settle – MACE WINDU returns in an action-packed adventure from OLD MAN HAWKEYE’S Ethan Sacks. You can run, but can you hide from the twin lightsabers of Sith assassin ASAJJ VENTRESS? Feel her fury in a tale expertly woven by veteran STAR WARS comic scribe Jody Houser (THRAWN, THE AMAZING SPIDER-MAN: RENEW YOUR VOWS). And is JAR JAR BINKS’ role in the Star Wars story over? NOT BY A LONG SHOT. Because Chip Zdarsky (PETER PARKER: THE SPECTACULAR SPIDER-MAN and MARVEL TWO-IN-ONE) has a rancor bone to pick with the galaxy’s most notorious Gungan. You can take the clone out of the war but you can never take the war out of the clone – CAPTAIN REX dusts off his blaster and enters the fray in a story by X-MEN: GOLD author Marc Guggenheim. Rated T.”