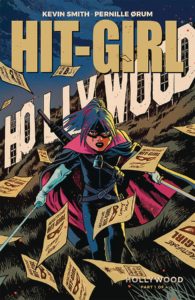 Kevin Smith kicks off the first arc of a HIT-GIRL series relaunch. If you’re wondering why Mark Millar isn’t writing HIT-GIRL, KICK-ASS and KINGSMAN, those properties weren’t included in the Netflix deal, and Millar is exclusive to the Netflix stuff. So, he’s farming out these other properties to the people he trusts to take care of them. If you weren’t wondering, then I just wasted a little bit of your time. Sorry.

“NEW STORY ARC. ‘THE SILENT ERA,’ Part One Join film, podcast, and comics legend KEVIN SMITH (Green Arrow, Daredevil) and animation/illustration virtuoso PERNILLE ØRUM (DC Superhero Girls, Blush, Coral) for the glitz and gore of this all-new chapter of HIT-GIRL. Our favorite adolescent assassin tears Tinsel Town a new one when she realizes her life’s being dramatized for the silver screen. Hit-Girl storms sets, wages war on fat-cat movie bosses, and lures old enemies out of hiding in this Californian bloodbath.”