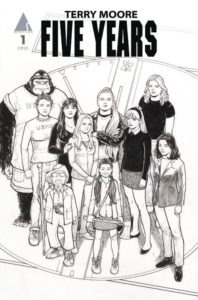 Terry Moore is a fantastic storyteller, a true stand-out in this medium. So, you can imagine how cool a new series that ties all of his ‘Terryverse’ series together sounds. Exciting!

“Five Years weaves the many strands of the ‘Terryverse’ into one epic saga, years in the making. A dangerous paper written by Lilith has been leaked to the nations of the world containing a formula for the ultimate weapon, and now labs around the globe are attempting to build and test the Phi Bomb. Tambi, in an all-out effort to find the labs and stop them, has enlisted the help of Ivy Raven, Julie Martin, Rachel and Zoe. Meanwhile, Katchoo and Francine have moved their household – including the kid’s new bodyguard, Samantha Locklear – to the beach where Katchoo devises her own solution to the problem…”