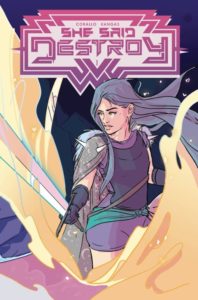 Whoa, you might want to check this one out. It could easily be as big a hit as HEATHEN was for Vault Comics. Looks good.

“Over millennia, Brigid, Goddess of theSun, has conquered and converted the entire solar system into worshipping her and her alone, save one space colony. The witches of Fey are the last believers of The Morrigan, Goddess of Death, Brigid’s sister and the only other God left. As Brigid’s forces prepare for one final battle, The Morrigan prepares to do what she does best: Destroy.”