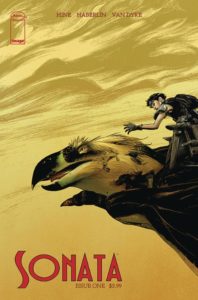 This is an intriguing, new ongoing sci-fi series from Image. It has all the makings of a hit.

“‘THE FALL’-In this all-new series from DAVID HINE (THE BULLETPROOF COFFIN), BRIAN HABERLIN (WITCHBLADE), and GEIRROD VAN DYKE (SPAWN, MEDIEVAL SPAWN/WITCHBLADE), two cultures clash on a planet they each believe is their Promised Land. The Rans are a peace-loving people, but the Tayans are a race of warriors who seek to colonize and control. The mysterious Sleeping Giants also call this place home, though no one knows if they’re monsters or the gods of legend. And amidst all this, a young woman named Sonata is willing to break all the rules to find her place in this world-and she’s not about to let sleeping gods lie.”