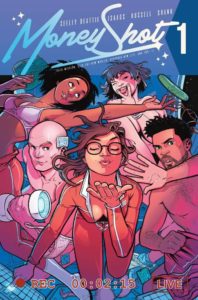 This new series from Vault has a premise that is just risqué enough to ensure it’ll probably be an unexpected hit.

“In the near future, space travel is ludicrously expensive and largely ignored. Enter Christine Ocampos, inventor of the Star Shot teleportation device. Her big idea: She’ll travel to new worlds, engage-intimately-with local aliens, and film her exploits for a jaded earth populace trying to find something new on the internet. Now, Chris and her merry band of scientist-cum-pornstars explore the universe, each other, and the complexities of sex in MONEY SHOT. A story about scientists having sex with aliens for the glory of mankind-and money.”