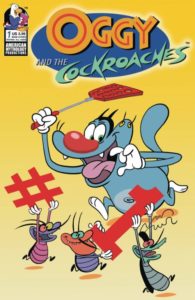 If you’re one of the 4.3 million YouTube subscribers to this one, this comic series may be of interest to you!

“The YouTube sensation arrives in comics. Oggy is a cat that just wants to watch TV but those pesky cockroaches, Joey, Dee Dee, and Marky aren’t happy until they drive poor Oggy crazy. This incredible premier issue delivers two new stories – ‘20,000 Cockroaches Under the Sea’ in which Oggy discovers the cockroach Atlantis in the depths of his bathtub and ‘A Bump in the Night’ when Joey, Dee Dee, and Marky turn scary movie night into a hilarious evening of terror for poor Oggy. Illustrated by animator Dean Rankie, these new comic tales deliver non-stop hilarity for Oggy fans worldwide. Oggy and the Cockroaches #1 comes with three cover editions – Main and Variant covers by animator Dean Rankie, and a limited edition Animation Cel Cover.”