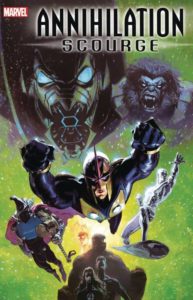 The original 2006 Annihilation event launched the immensely successful, modern Guardians of the Galaxy. Could this cosmic event be the start of something new and great as well?

“THE OPENING SALVO FOR DECEMBER’S MAIN EVENT. Something is stirring in the Negative Zone…something that the Marvel Universe isn’t ready for. Will Nova be able to assemble a team powerful enough to tackle this burgeoning threat, or is it already too late to stop its descent upon the galaxy? For the Cosmos’s greatest heroes, ANNIHILATION is only the beginning… Rated T+.”