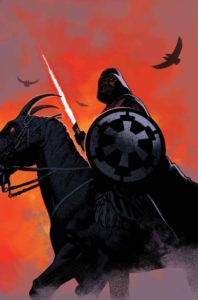 It’s de ja vader all over again… This. Looks. Super. Awesome! An anthology of stories about the impressions and reputation of Darth Vader seen through others POV. Can’t wait! Again. (We’ll probably never know if this is just the same series that Wendig was canned from with a new writer.)

“WHO IS DARTH VADER? He has been many things: a SITH warrior, a commander, a destroyer. DARTH VADER is to many throughout the GALACTIC EMPIRE a symbol of fear and mysterious, otherworldly power. But there are some who have seen the DARK LORD in a different light. There are some corners of the galaxy so dark and desperate that even Vader can be a knight in shining armor. The first issue of a new STAR WARS limited series, writer Dennis Hopeless (CLOAK AND DAGGER, JEAN GREY) sheds new light on the many sides of the galaxy’s greatest villain. Rated T.”